Level control in existing flotation cells was carried out via manual sluice gates which were integrated into the original cells.  However, the sluice gates were not capable of providing accurate level control due to leakage, nor could they completely isolate the cells for maintenance.

Another reason for improving upon the cell designs was that the operators would have to manually adjust the gates to control liquid level in the tanks; this made it nearly impossible to reach a steady liquid level and took up a significant amount of the operators’ time.  These issues caused a significant amount of overflow in the flotation cells which not only required constant clean up, but resulted in lost product. 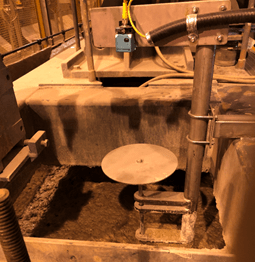 Halyard investigated several options for controlling the liquid level within the cells.  A common means to control level in flotation cells is by using dart valves.  However, dart valves would be difficult to retrofit into the cells, therefore it was determined that pinch valves would be a viable solution.

A series of pinch valves were installed on the outlets of each cell to control the liquid level in each tank.  A level transmitter was used to communicate with the pinch valve to partially open and close.

To overcome the challenge of measuring liquid level in the cells (as opposed to the froth layer on top of the liquid), a plate and ball float was designed by Halyard.  The ball sits on the surface of the liquid, while the plate is always above the froth level.  The distance between the plate and level transmitter measures the liquid level and opens or closes the pinch valves accordingly.

The solutions designed and implemented by Halyard saved the client from having to make major modifications to their flotation circuit and also provided the following benefits to operations: