BarCan (formerly Barite Mud Services Inc.) recovers barite from tailings produced from the historic ASARCO zinc mine established in 1927. The API-grade barite product is supplied to onshore and offshore oil markets in Canada and around the world. In 2020, Halyard completed several process plant upgrades including the addition of a screening system for dry feed, modification of the flotation circuit, addition of a gravity circuit, and improvements to the existing electrical, instrumentation, and piping.

During the 2020 operating season, issues such as sanding and low density in the feed thickener and in the flotation circuit were evident.  Results from metallurgical testwork determined that coarse material with a significantly low barite concentration was the cause of the sanding.  To optimize the process plant, coarse material had to be removed from the circuit prior to the feed thickener.

In addition to determining a suitable change to the process, any new equipment upstream of the feed thickener would have to be installed close to the tailings pond, on relatively soft ground and commissioned within a short timeframe. 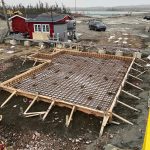 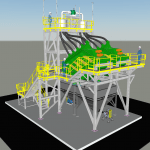 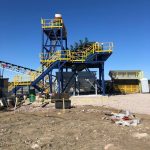 It was determined that the utilization of fine screening would assist with reducing the amount of oversize material in the thickener.  Although the coarse material is referred to as “oversized”, the particles were relatively small.  Therefore, fine screening was utilized to separate the coarse particles from the slurry.  The layout of the two screens, flow diverter, structural steel, tanks, piping and electrical components were designed by Halyard.

The foundation for the circuit was also designed by Halyard, and since this was in an area with poor ground conditions and combined with the fact that this was a fast-tracked project, Halyard implemented the use of 40 25-foot helical piles which avoided the need for traditional excavation and backfill.  The piles were finished with a 300 mm thick reinforced concrete slab on surface.

In spite of the complexity of the foundation requirements, Halyard completed the engineering and designs on schedule and managed the civil works construction which was completed within 2 weeks of site establishment.